"Take a lesson from the story of Jonah in the scripture reading today. I am willing, even now, after so many lives I created have been destroyed, to forgive"
January 23, 2021 at 6:54 pm
Share:EmailPrint

“The most precious of all your possessions, children, is your relationship with Me. No day should pass without your greater effort in coming closer to Me. I have told you that obedience to My Commandments pleases Me. Yes, it pleases Me. Your prayers and sacrifices please Me, as well. Keep Me as part of your day. I enjoy assisting you in many small and great ways.”

“Focus your desire for success upon building your house of personal holiness stronger. That is, indeed the greatest victory of all, and it is within your grasp. These are evil times, as you know. Your prayers and sacrifices are like the sail on a ship that carries you over the sea of controversy.”

“Pray for your nation** to repent of the sin of abortion for that is the load stone which is causing the government to sink. Take a lesson from the story of Jonah in the scripture reading today. I am willing, even now, after so many lives I created have been destroyed, to forgive, for My Mercy is perfect. Just as lives have been destroyed without repentance – so too, is your government being destroyed. Repent!”

Read Jonah 3:1-10+ Then the word of the Lord came to Jonah the second time, saying, “Arise, go to Nineveh, that great city, and proclaim to it the message that I tell you.” So Jonah arose and went to Nineveh, according to the word of the Lord. Now Nineveh was an exceedingly great city, three days’ journey in breadth. Jonah began to go into the city, going a day’s journey. And he cried, “Yet forty days, and Nineveh shall be overthrown!” And the people of Nineveh believed God; they proclaimed a fast, and put on sackcloth, from the greatest of them to the least of them. Then tidings reached the king of Nineveh, and he arose from his throne, removed his robe, and covered himself with sackcloth, and sat in ashes. And he made proclamation and published through Nineveh, “By the decree of the king and his nobles: Let neither man nor beast, herd nor flock, taste anything; let them not feed, or drink water, but let man and beast be covered with sackcloth, and let them cry mightily to God; yea, let every one turn from his evil way and from the violence which is in his hands. Who knows, God may yet repent and turn from his fierce anger, so that we perish not?” When God saw what they did, how they turned from their evil way, God repented of the evil which he had said he would do to them; and he did not do it.
* On Sunday, January 17, 2021, President Trump Declared January 22nd – “National Sanctity of Human Life Day” stating: “Every human life is a gift to the world. Whether born or unborn, young or old, healthy or sick, every person is made in the holy image of God, …The Almighty Creator gives unique talents, beautiful dreams, and a great purpose to every person. On National Sanctity of Human Life Day, we celebrate the wonder of human existence and renew our resolve to build a culture of life where every person of every age is protected, valued, and cherished.”. (Read more…)
** U.S.A.

Mary, Protectress of the Faith

January 21, 2021 - "Let your hearts embrace obedience to My Commandments. The first and foremost of which is to love Me above all else. The second is to love... 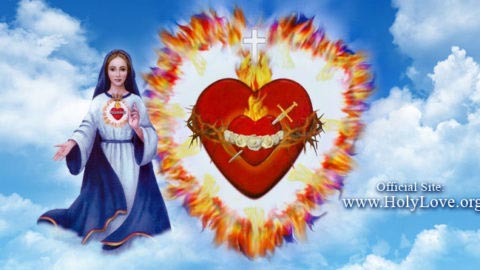 Believe in the power of prayer

January 20, 2021 - "You will always be one nation, under My Domain. Unfortunately, leadership of this great nation* will not legislate now in agreement with...

The One World Order is not My Call to unity

January 19, 2021 - "Build your 'house' of personal holiness strong in the face of the destruction of the democratic soul of your nation"

“Believe that I am always with you.  Your love of Me makes all things...

"Let your sanctuary be in the United Hearts of Jesus and Mary and in My Divine...

"I ordain life and death according to My Divine Will. In every case, My timing...

March 31, 2020 – Patience helps you to surrender to My Will in any given present moment

My favor rests upon those who trust in Me