"It is a Victory which dumbfounded Satan. The morning was still and peaceful, in stark contrast to the stormy clatter of Good Friday"
April 5, 2021 at 3:01 am
Share:EmailPrint

Easter Sunday – Solemnity of the Resurrection of the Lord

“Alleluia! Today we celebrate My Son’s* Victory over sin and death! It is a Victory which dumbfounded Satan. The morning was still and peaceful, in stark contrast to the stormy clatter of Good Friday. His rise from the dead was quiet and peaceful and without fanfare. But the effects of His Resurrection brought victory down through the generations into the hearts of believers.”

“All of Heaven celebrates His Victory today. All problems seem to fade away in the everlasting Light of His Victory. Today I am a very real part of the heart of the world and the victory over sin in each heart. Rejoice with Me!”

Read John 20:1-18+ The Resurrection of Jesus – Now on the first day of the week, Mary Mag’dalene came to the tomb early, while it was still dark, and saw that the stone had been taken away from the tomb. So she ran, and went to Simon Peter and the other disciple, the one whom Jesus loved, and said to them, “They have taken the Lord out of the tomb, and we do not know where they have laid him.” Peter then came out with the other disciple, and they went toward the tomb. They both ran, but the other disciple outran Peter and reached the tomb first; and stooping to look in, he saw the linen cloths lying there, but he did not go in. Then Simon Peter came, following him, and went into the tomb; he saw the linen cloths lying, and the napkin, which had been on his head, not lying with the linen cloths but rolled up in a place by itself. Then the other disciple, who reached the tomb first, also went in, and he saw and believed; for as yet they did not know the Scripture, that he must rise from the dead. Then the disciples went back to their homes. Jesus Appears to Mary Magdalene But Mary stood weeping outside the tomb, and as she wept she stooped to look into the tomb; and she saw two angels in white, sitting where the body of Jesus had lain, one at the head and one at the feet. They said to her, “Woman, why are you weeping?” She said to them, “Because they have taken away my Lord, and I do not know where they have laid him.” Saying this, she turned round and saw Jesus standing, but she did not know that it was Jesus. Jesus said to her, “Woman, why are you weeping? Whom do you seek?” Supposing him to be the gardener, she said to him, “Sir, if you have carried him away, tell me where you have laid him, and I will take him away.” Jesus said to her, “Mary.” She turned and said to him in Hebrew, “Rabbo’ni!” (which means Teacher). Jesus said to her, ” Do not hold me, for I have not yet ascended to the Father; but go to my brethren and say to them, I am ascending to my Father and your Father, to my God and your God.”* Mary Magdalene went and said to the disciples, “I have seen the Lord”; and she told them that he had said these things to her.
Jesus gives the Disciples the Power to forgive sins
On the evening of that day, the first day of the week, the doors being shut where the disciples were, for fear of the Jews, Jesus came and stood among them and said to them, “Peace be with you.” When he had said this, he showed them his hands and his side. Then the disciples were glad when they saw the Lord.
* Our Lord and Savior, Jesus Christ. 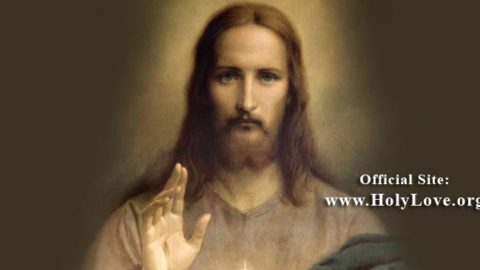 April 2, 2021 - "There is no pain on earth - nor will there ever shall be - that would equal the pain I suffered during My Passion. My pain was not only...

April 1, 2021 - "Today you celebrate the installation of the Priesthood and the first Eucharistic celebration. What joy I feel to share this with you tonight"

Trust in My love for you.  In and through this love, I support you in good...

"This pandemic offers you the opportunity to cleanse your hearts from the...

"If you allow your ambitions to be only self-fulfilling without considering the...

Papa God, I surrender this day to you