"Dear children, you do not see the dangers of these times, mainly because you believe the distorted propaganda represented to you as news. Much of what you are told is not Truth"
August 17, 2020 at 5:33 am
Share:FacebookTwitterEmailPrint

Solemnity of the Assumption of the Blessed Virgin Mary

The Blessed Virgin Mary says: “Praise be to Jesus. For Me, dear children, My Assumption was neither the beginning or the end. It was both. It was the end of My earthly existence. However, it was the beginning of My Reign as Queen of Heaven and Earth from My throne in Heaven. From Heaven, I am able to intercede for all of my children. I am able to see all issues which lie hidden in hearts. I can, as Mediatrix of All Grace, direct each soul on the path of salvation.”

“Dear children, you do not see the dangers of these times, mainly because you believe the distorted propaganda represented to you as news. Much of what you are told is not Truth. In this country,* the media has made political issues out of moral issues. Violence has been turned into a solution. Anarchy has become a sought-after alternative to law and order. All of this domestic uproar has not distracted your sitting President** from business. He has made an important stride in the Middle East in bringing together historical enemies.*** This goes unnoticed by your enemy – the news media.”

“Dear children, I am on the side of your victory over evil. I am interceding for your good. Trust in My influence with My Son. Pray your rosaries with faith in your hearts.”

Read Colossians 3:23-25+ – Whatever your task, work heartily, as serving the Lord and not men, knowing that from the Lord you will receive the inheritance as your reward; you are serving the Lord Christ. For the wrongdoer will be paid back for the wrong he has done, and there is no partiality.
*U.S.A.
**President Donald J. Trump.
***On August 13, 2020, Israel and the United Arab Emirates reached a landmark accord sealed by President Trump as the two agreed to “full normalization of relations” in exchange for Israel suspending annexation of occupied West Bank territory.

"Your country* will always remain independent, protecting its freedom from would-be marauders - economic or otherwise."

"Every present moment is the gateway to the next present moment. Your plans for the future must be one with My Plans. Therefore, patiently await for My Plans to unfold for you"

"Given all the restrictions in the world in regards to travel, this is the best way to spread My Triple Blessing around the world"

March 21, 2020 – Accept inconveniences in the spirit of sacrifice

"Children, if you live in the Truth of the seriousness of these times then you will be patient enough - courageous enough - to persevere until the threat of this virus diminishes and restrictions on... 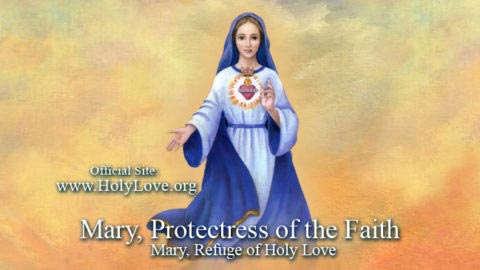 "Today, dear children, I rejoice with you when I am in your presence. I rejoice that you have not succumbed to the traps of modern theology"

"The prayer that is seasoned with love is the best prayer. Therefore, prepare for these prayer events by filling your heart with much love - love of Me - your...

"Children, it is the enemy of your soul who seeks to destroy your strength in...

"The self-centered soul has more trouble abandoning himself to Me than does the...

"If a soul pursues the honest path of Truth, he will not be confounded by...

"Do not allow scruples to tether your heart to the world. Do not be chained to...

"Dear children, the path away from God is paved with disordered free will. Make...