Keep your hearts in the safety of Holy Love

"These times are more evil than any in the history of the human race. Truth is under attack. Salvation is under attack"
April 23, 2021 at 9:21 pm
Share:EmailPrint

Keep your hearts in the safety of Holy Love

“These days, the mass media has undergone a campaign to convince your nation* that gun control is necessary. They headline shootings every day without regard for the real culprit which is what is in hearts. If people transformed their hearts in Holy Love, there would be no killings. There would be no need for guns. These times are more evil than any in the history of the human race. Truth is under attack. Salvation is under attack. The checks and balances established in your government are under attack. The Truth is, those in power are motivated to dismantle the safety of those who live in the Truth and bring them under the power of untruth. That is what gun control is about. If a person cannot defend himself, he falls under the power of those who can.”

“In your hearts do not make more of the headlines than there is. Keep your hearts in the safety of Holy Love, which bears only the fruits of loving Me above all else and neighbor as self. The safety of your heart and soul is more important than all else.”

Read 1 John 3:14+ We know that we have passed out of death into life, because we love the brethren. He who does not love remains in death.
* U.S.A.

The heart which forgives is My ready instrument in the world

April 23, 2021 - "I cannot fill the bitter heart with My Grace, as there is no room in such a heart. It is already filled with anger and negative memories"

Believers must stand boldly for the Truths of Faith

April 21, 2021 - "Lack of faith has resulted in disunity amongst all people and all nations. While unity in righteousness has suffered, unity in evil has... 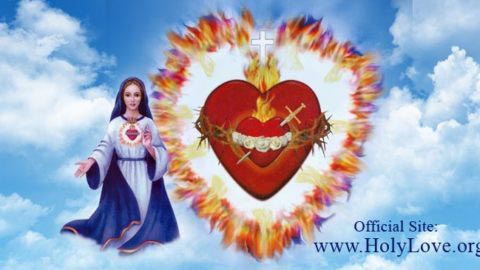 April 20, 2021 - These are the evil last days of My created world. Man has compromised and convoluted My Commandments. He lives, in many cases, as though I do...

"Those who accept My Triple Blessing will be strengthened and better prepared...

"The prayer that is seasoned with love is the best prayer. Therefore, prepare...

Your personal holiness must be constructed on the Truth

December 2, 2020 - "Keep your personal spiritual house free of what is called...