September 10, 2020 – Mankind is approaching the most serious times in all of history

"These Messages come as a means of influencing hearts for the greater good. I urge you now to take heed and align your hearts with the dictates of My Commandments. This is your last hope"
September 10, 2020 at 11:39 pm
Share:EmailPrint

September 10, 2020 – Mankind is approaching the most serious times in all of history

Once again, I (Maureen) see a Great Flame that I have come to know as the Heart of God the Father. He says:

“Children, in the world, mankind is approaching the most serious times in all of history. My Justice is far-reaching. It is already manifest in a diminished way all over the earth. If all of My children would pay attention and heed the signs of the times, I would pay attention to their repentance and lessen My Justice. As it is, you have a pandemic, natural disasters of unprecedented proportions and rising friction amongst nations with grave consequences if they are unresolved.”

“Natural resources are very often held in ransom. Political differences carry the responsibility of shaping the future of the world in their final resolution. Because man has such power and knowledge to create and destroy, what he carries in his heart is of great importance. These Messages* come as a means of influencing hearts for the greater good. I urge you now to take heed and align your hearts with the dictates of My Commandments. This is your last hope.”

Read Jonah 3:3-10+ – So Jonah arose and went to Nineveh, according to the word of the Lord. Now Nineveh was an exceedingly great city, three days’ journey in breadth. Jonah began to go into the city, going a day’s journey. And he cried, “Yet forty days, and Nineveh shall be overthrown!” And the people of Nineveh believed God; they proclaimed a fast, and put on sackcloth, from the greatest of them to the least of them. Then tidings reached the king of Nineveh, and he arose from his throne, removed his robe, and covered himself with sackcloth, and sat in ashes. And he made proclamation and published through Nineveh, “By the decree of the king and his nobles: Let neither man nor beast, herd nor flock, taste anything; let them not feed, or drink water, but let man and beast be covered with sackcloth, and let them cry mightily to God; yea, let every one turn from his evil way and from the violence which is in his hands. Who knows, God may yet repent and turn from his fierce anger, so that we perish not?” When God saw what they did, how they turned from their evil way, God repented of the evil which he had said he would do to them; and he did not do it.
* Maureen Sweeney-Kyle.

Have hope in your hearts that I will help this nation

December 29, 2020 - "I have not given this country a place of leadership in the world only to have it destroyed by outside agitators who seek to control the...

Be courageous in the name of democracy

December 28, 2020 - "I tell you, solemnly, nefarious agents are at work trying to destroy many nations which have, until now, stood independent from evil... 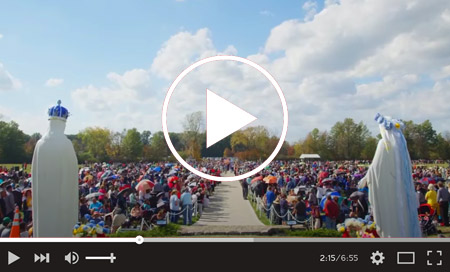