The One World Order lays bare the path for the Antichrist

"The lawless one desires the singular leadership of all people and every nation in order to lead every soul to his perdition. Do not lose track of your national pride"
November 15, 2020 at 2:52 am
Share:FacebookTwitterEmailPrint

The One World Order lays bare the path for the Antichrist

“The One World Order lays bare the path for the Antichrist. The lawless one desires the singular leadership of all people and every nation in order to lead every soul to his perdition. Do not lose track of your national pride. Do not favor the loss of your borders. Without borders, you lose America. Take pride in the safety of law and order, without which you have anarchy. Show respect for one another by leading a law-abiding life. Pay attention as to where liberalism – progressivism is trying to lead you. Renew your pride in America as a free nation under God while there is still time.”

“I speak here* today in an effort to break through the fog of liberalism that is settling upon the heart of the world. Have the courage to stand together in righteousness through prayer. This is the path of victory. The hope of the future of the world is through this prayer effort which will lead to a God-fearing victory.”

Read 2 Thessalonians 2:9-12+ The coming of the lawless one by the activity of Satan will be with all power and with pretended signs and wonders, and with all wicked deception for those who are to perish, because they refused to love the Truth and so be saved. Therefore, God sends upon them a strong delusion, to make them believe what is false, so that all may be condemned who did not believe the Truth but had pleasure in unrighteousness.
Read Colossians 2:8-10+ See to it that no one makes a prey of you by philosophy and empty deceit, according to human tradition, according to the elemental spirits of the universe, and not according to Christ. For in him the whole fulness of deity dwells bodily, and you have come to fulness of life in him, who is the head of all rule and authority.
Read Romans 16:17-18+ I appeal to you, brethren, to take note of those who create dissensions and difficulties, in opposition to the doctrine which you have been taught; avoid them. For such persons do not serve our Lord Christ, but their own appetites, and by fair and flattering words they deceive the hearts of the simple-minded
*The apparition site of Maranatha Spring and Shrine located at 37137 Butternut Ridge Rd in North Ridgeville, Ohio 44039. 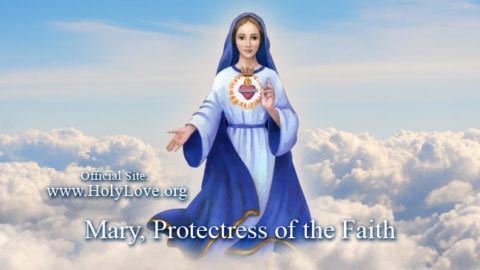 November 14, 2020 - "Praise be to Jesus. My daughter (to the seer Maureen), the enemy of your freedoms - the liberalists - are trying to destroy the...

Do not be discouraged in your prayer efforts

November 13, 2020 - "You do not see what changes are taking place in hearts. The best prayer is to pray that evil is exposed by the light of the Holy Spirit...

Be united in prayer – be united as a free nation

November 12, 2020 - "Do not be guided by the mass media which is basically Satan's instrument."

January 23, 2020 – Every effort to bring an end to abortion gains you a higher place in Heaven

"It is never according to My Commandments to take any life which I create. It...

My Commandments are the Truth. They are your way to salvation

September 5, 2020 – Live in union with My Commandments

"Let there be peace in your heart and peace all around you - for what is in...

"My Passion was an example for all to follow in the final hours of life. I lost...